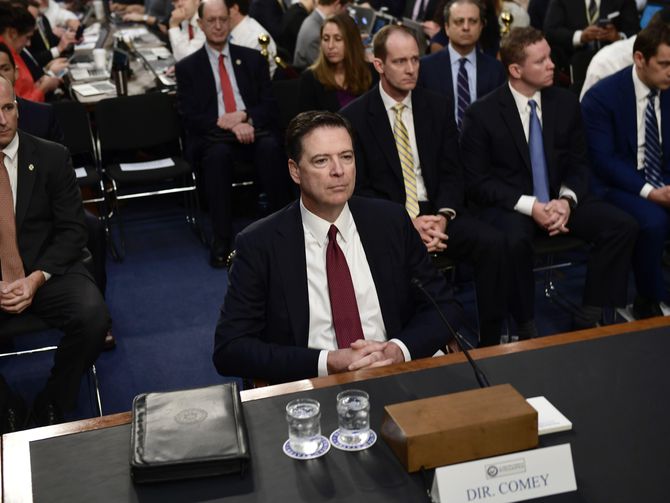 Russian hackers were meddling with the 2016 US election right from the start of the campaign season.

Former FBI director James Comey testified before a Senate Intelligence hearing on Thursday, a month after President Donald Trump fired him on May 9. The hearing, centered on Comey’s conversations with President Trump, comes amid the FBI’s investigations into potential campaign ties with Russia that continue to haunt the commander-in-chief.

Allegations of Russian influence on the US presidential election stretch all the way back before the midyear Democratic National Convention, when hackers spear-phished officials and released documents through WikiLeaks.

Revelations about Russian hackers continued to surface through the months leading up to and following the November election. That includes the top-secret NSA report leaked on Monday, detailing how nation-state actors launched cyberattacks against an election software company, whose technology was used in eight states, and tried spear-phishing election officials.

During Thursday’s testimony, Comey said he first became aware of Russia-connected meddling in the late summer of 2015, around the time Trump announced he was running for president.

“There was a massive effort to target government and nongovernmental agencies, like nonprofits,” Comey said. He noted that there could be hundreds, and possibly more than 1,000 officials who were targeted in the cyberattacks from Russia.

The ex-FBI director noted that there was strong evidence Russian hackers wanted to interfere with the presidential outcome.

“They did it with overwhelming technical efforts, and it was an active-measures campaign driven from the top of the government,” Comey said. “That’s about as un-fake news as you can possibly get.”

The cyberattacks were among the factors that led the FBI to launch an investigation into whether Trump’s campaign had any connections with Russian hackers. In Comey’s opening statement, released a day ahead of Thursday’s Senate committee hearing, the former FBI director detailed how Trump tried to stop the investigation on multiple occasions.

“He described the Russian investigation as ‘a cloud’ that was impairing his ability to act on behalf of the country,” Comey said in his statement, regarding a March 30 conversation with Trump. “He said he had nothing to do with Russia, had not been involved with hookers in Russia, and had always assumed he was being recorded when in Russia.”

“I was so stunned by the conversation that I just took it in,” Comey said.

Comey confirmed that Trump wasn’t under investigation when he served as the FBI director.

On Friday morning, Trump weighed in on the hearings via Twitter, with a single tweet indicating a sense of relief. “Despite so many false statements and lies, total and complete vindication…and WOW, Comey is a leaker!

The president had been expected to live-tweet throughout the testimony, despite advice against that from his legal team, but he refrained from doing so Thursday morning.

CBS News confirmed that Trump was watching the testimony with his legal counsel, Marc Kasowitz.

During the testimony, Comey explained that he started compiling memos of his interactions with Trump because he felt that “something big” was going to happen and he “needed to document it.”

He also commented on a tweet that the president sent out three days after Comey was fired.

“I’ve seen the tweet about tapes. Lordy, I hope there are tapes,” Comey said.

CNET Magazine: Check out a sample of the stories in CNET’s newsstand edition.