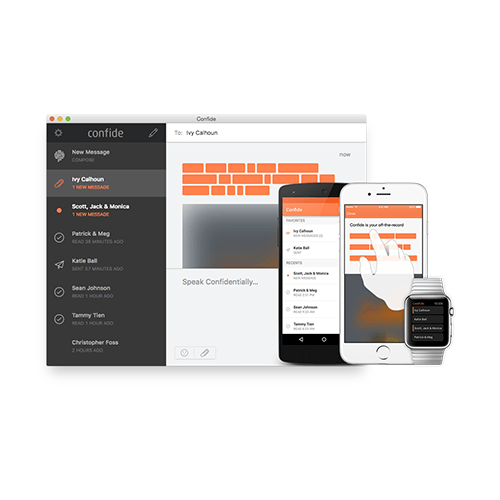 The makers of the popular messaging app Confide said Wednesday that it has patched multiple security vulnerabilities that could have allowed hackers to intercept messages sent using its secure end-to-end messaging platform.

The flaws were identified in two separate reports, both released Wednesday by security firms IOActive and Quarkslab. Both allege there are critical security vulnerabilities in versions of Confide’s encrypted messaging app, including version 4.0.4 for Android and 1.4.2 for Windows and OS X .

The security of Confide’s encrypted messaging platform has taken center stage ever since reports surfaced last month that senior White House staff, including press secretary Sean Spicer, were using the app. Confide claims to offer “battle tested, military grade encryption.” According to Google Play, the Android app has been installed between 100,000 to 500,000 times.

Researchers with IOActive said the Confide suffered from a bevy of security vulnerabilities including:

Quarkslab also took issue with some of security vulnerabilities highlighted by IOActive, and singled out the way Confide handled public and private encryption keys.

“The most obvious problem… is linked to the fact that the encrypted message origin and the authenticity of the public encryption key transmitted by the server can in no way be verified by the client,” wrote Jean-Baptiste Bédrune, security researcher with Quarkslab.

“The Confide server could generate its own key pair and transmit the public part to a client when the latter requests the public key of a recipient (we only note that Confide is able to do so, not that it does so). This client then unknowingly encrypts a message that can be decrypted by the server. Finally, when the server sends the message to the recipient, it is able to re-encrypt the message with its own key for the actual recipient,” Bédrune wrote.

“What seems different about (Confide) encryption is that it appears to regenerate the public key under certain circumstances. It’s unclear why, but unlike Signal and WhatsApp, which consider it something to alert you about if your public key changes, Confide appears to consider this part of its function. Key exchange is always the most difficult part of good encryption routines. Depending on whether or not Confide is able to detect this and warn the user, it’s possible (although not confirmed) that the application could be susceptible to the same types of man-in-the-middle attacks that we’ve seen theorized in WhatsApp (if you leave the alerts off) and iMessage,” Zdziarski wrote.

Bédrune said the confidentiality of the exchanged messages depends on the robustness of TLS.

“Confide can technically read all the messages that pass through its servers. End-to-end encryption, as it is implemented, solely relies on the server through which the messages pass,” he said.

Quarkslab also claims that security features in the Android, iOS and desktop app, such as message deletion and screenshot prevention, can be easily circumvented.

For its part, Confide co-founder Jon Brod told Threatpost via email Wednesday the company was able to fix the issues quickly.

“We were able to detect anomalous behavior and remediate many of the issues during IOActive’s testing in real time starting on February 24. We were able to quickly address the remaining issues after the initial contact and roll out client updates in less than 48 hours. Not only have these issues been addressed, but we also have no detection of them being exploited by any other party. We do acknowledge the findings, but believe that the firm is overstating the severity level of some of them.”

IOActive claims the company privately disclosed its research to Confide in February and that Confide fixed the issues and updated the app on March 3, 2017.

Brod did not address the security concerns raised by Quarkslab.

“All the issues have been reported to Confide, and they are working on fixing them. In the meantime, do not consider your conversations to be so well concealed,” Bédrune wrote.