James Comey Finally Tells His Side Of The Story

Updated at 3:50 p.m. ET“I need loyalty. I expect loyalty.” Those are the words James Comey will testify President Trump said to him

“I need loyalty. I expect loyalty.” Those are the words James Comey will testify President Trump said to him at a January dinner when the former FBI director appears before the Senate Intelligence Committee Thursday.

In his prepared opening remarks, Comey describes multiple conversations he had at Trump’s initiative about the Russia investigation and whether its effect on his presidency could be mitigated. He recalls his unease with Trump’s habitual breaches of the traditional line separating the White House from federal law-enforcement agencies. And he depicts a president eager to create “some sort of patronage relationship” over him in an apparent effort to undermine the FBI’s independence and interfere with an ongoing investigation. 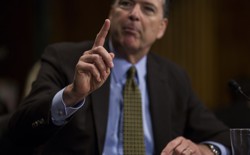 The former director also describes multiple occasions on which he assured Trump that he wasn’t personally under investigation, an assertion Trump himself made in the letter firing Comey last month. He begins his story with the first time he met Trump, during a January 6 meeting at Trump Tower. The meeting’s purpose was to brief him about the intelligence community’s findings about Russian interference in the election.

Before he traveled to New York, Comey says he consulted with Justice Department officials about whether he could tell Trump he wasn’t under investigation. “That was true; we did not have an open counter-intelligence case on him,” Comey said. “We agreed I should do so if circumstances warranted. During our one-on-one meeting at Trump Tower, based on President-Elect Trump’s reaction to the briefing and without him directly asking the question, I offered that assurance.”

But the bulk of the prepared testimony revolves around Trump’s one-on-one efforts to extract fealty from Comey and to influence federal inquiries into Russian electoral interference and former National Security Adviser Michael Flynn. The most damning portion comes when Comey recounts a January 27 dinner at the White House to which Trump invited him. Comey agreed, saying he was under the impression he wouldn’t be the only one present. He was.

According to Comey, Trump opened by asking him whether he intended to stay on in his position. (Comey was three years into a 10-year tenure at the time.) “My instincts told me that the one-on-one setting, and the pretense that this was our first discussion about my position, meant the dinner was, at least in part, an effort to have me ask for my job and create some sort of patronage relationship,” Comey said. “That concerned me greatly, given the FBI’s traditionally independent status in the executive branch.”

When Comey tried to tell Trump he was not “reliable” in the political sense, but politically neutral, he says the tone of the conversation changed.

A few moments later, the President said, “I need loyalty, I expect loyalty.” I didn’t move, speak, or change my facial expression in any way during the awkward silence that followed. We simply looked at each other in silence. The conversation then moved on, but he returned to the subject near the end of our dinner.

Then, in a moment Comey describes with palpable awkwardness, he says the president pressed him on the matter again, at which point Comey says he offered Trump his “honesty,” then his “honest loyalty,” in an attempt to escape from the encounter. His narrative picks up at a February 14 White House meeting in which Trump asked him to stay behind alone. The subject, Comey says, was Michael Flynn.

The President then returned to the topic of Mike Flynn, saying, “He is a good guy and has been through a lot.” He repeated that Flynn hadn’t done anything wrong on his calls with the Russians, but had misled the Vice President. He then said, “I hope you can see your way clear to letting this go, to letting Flynn go. He is a good guy. I hope you can let this go.” I replied only that “he is a good guy.” (In fact, I had a positive experience dealing with Mike Flynn when he was a colleague as Director of the Defense Intelligence Agency at the beginning of my term at FBI.) I did not say I would “let this go.”

From there, Comey says, he quickly drafted an unclassified memo about the encounter.

He also explained in his prepared remarks why he didn’t notify anyone beyond his immediate circle of aides and lieutenants within the FBI’s upper ranks. The question was one of many that Republican lawmakers planned to ask at his hearing this week.

“The FBI leadership team agreed with me that it was important not to infect the investigative team with the President’s request, which we did not intend to abide,” he explained. “We also concluded that, given that it was a one-on-one conversation, there was nothing available to corroborate my account. We concluded it made little sense to report it to Attorney General [Jeff] Sessions, who we expected would likely recuse himself from involvement in Russia-related investigations.” He noted that Sessions eventually did so two weeks later.

There are still some questions left unanswered. While Comey mentions nine one-on-one conversations with Trump at the beginning of his statement, he only describes four of them. He does not indicate whether he had any uneasy conversations with anyone on the White House staff or other members of the federal government beyond the president. (The Washington Post reported Tuesday, for example, that Trump asked Director of National Intelligence Dan Coats and NSA Director Mike Rogers to intervene in Comey’s investigation. Both took questions on the report from Senate lawmakers at a hearing Wednesday morning.) Republican senators will also likely quiz him on whether he drafted any memos following conversations with Barack Obama, Hillary Clinton, or anyone in the Justice Department during the Obama administration.

Comey narrates two more encounters at Trump’s initiative: a March 30 phone call placed by Trump in which the president asked Comey what they could do to “lift the cloud” of the Russia investigation, and an April 11 phone call following up on his previous request. Comey says he asked the president to have the White House counsel’s office call the Justice Department instead.

“That was the last time I spoke with President Trump,” Comey concludes. Trump fired him without warning 28 days later.